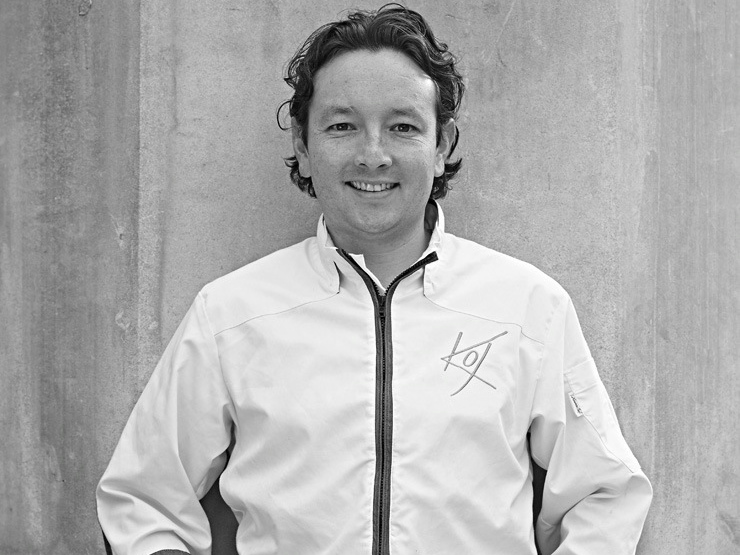 I’m Koj. I am half Japanese, half British. In 2012, I was a finalist on BBC1’s MasterChef, a dream-come-true experience in itself but also my springboard out of a career in finance into a new life in food. I now work as a chef, food writer and cookery teacher specialising in Japanese cuisine. I opened my first restaurant, Koj Cheltenham, in March 2017, following a successful popup in autumn 2016 and crowdfunding project via Kickstarter

Short version
Koj is a British-Japanese chef based in the Cotswolds with a unique ‘No sushi’ casual dining Japanese restaurant in Cheltenham. After reaching the pinnacle of amateur cooking success in the final of MasterChef 2012, he turned professional after a fast track training programme in Michelin starred kitchens across the UK and Europe, before specialising in Japanese cuisine where his heart and heritage lie. One of the most naturally talented and imaginative private chefs in the UK, he has cooked food for VIPs and celebrities including HM The Queen, AP McCoy, Andrew Lloyd Webber, Eddie Redmayne as well as other sports stars and supermodels. He teaches, promotes and demonstates Japanese cookery through his restaurant, cookery schools and food festivals around the UK. He has written in Crumbs Magazine, Spear’s, Cotswold Life and online lifestyle magazine The Cotswold Gentleman. He is a judge of the Great Taste Awards.

Longer version
Andrew Kojima is a British-Japanese chef, teacher and writer based in the Cotswolds. His mother taught him to cook from a young age and he first became seduced by the idea of becoming a chef after reading Anthony Bourdain’s Kitchen Confidential in 2001. However, after graduating with a degree in Classics from Oxford University, he stumbled onto the treadmill into finance, where he spent ten year as an investment research analyst.

Eventually, in 2012, he seized the opportunity to turn his passion into his profession: after reaching the pinnacle of amateur cooking in the final of BBC1’s MasterChef, his first stop was Michel Roux Junior’s Le Gavroche from where he continued a fast track training programme in the kitchens of Michelin star chefs such as Gordon Ramsay, Heston Blumenthal, Brett Graham and Sergio Herman.

After moving out of London in 2013, he continued his professional development, working with Wiltshire-based Michelin star chefs Guy Manning and Martin Burge, at The Red Lion and Whatley Manor, respectively. Learning discipline and techniques from top restaurants, he began work as a freelance private chef, using his own imagination, flair and creativity to create bespoke menus for private and corporate clients, which have included HM The Queen, Andrew Lloyd Webber, AP McCoy and Eddie Redmayne. He began to specialise in Japanese cookery by building a reputation as a guest chef instructor at leading cookery schools around the UK and by creating Japanese menus for the public via pop up nights at art galleries, pubs and restaurants.

Observing that there was less demand for sushi outside London, in 2015 he hosted his own two week “No sushi” pop up at a restaurant in Cirencester, which led to the search for a permanent site in the South West. The following year, he found a café in Cheltenham and after a whirlwind improvised makeover, took it over as a popup venue. This allowed him to test the market in Cheltenham over a nine week period with a “No sushi” menu of kushiyaki and izakaya-style grazing dishes, at the end of which he took over the lease. Early in 2017, he launched a Kickstarter crowdfunding campaign which successfully raised £54k to fit a Japanese-style open kitchen, refurbish the dining room and install a cocktail bar. After opening the doors to his first permanent restaurant, Koj Cheltenham, in March 2017, Jay Rayner published a favourable review in The Observer, which soon led to a mention in The Week. In late summer, Koj Cheltenham was listed in The Good Food Guide, followed by Harden’s in November and The Trencherman’s Guide early in 2018. Within its first 18 months, the restaurant has been runner up in the Best Restaurant category of Taste of Gloucestershire Food & Farming Awards, winner of Best Restaurant in the Cheltenham BID Awards and winner of Best Newcomer in the Cotswold Life Food & Drink Awards.

Koj continues to give cookery lessons and demonstrations, entertaining audiences with his personality and passion as much as his cooking. He has appeared as a guest chef on BBC and Channel 4 and has contributed to publications such as Crumbs Magazine, Cotswold Life, Spears Magazine and The Cotswold Gentleman. He has also written about his kitchen experience, which includes: