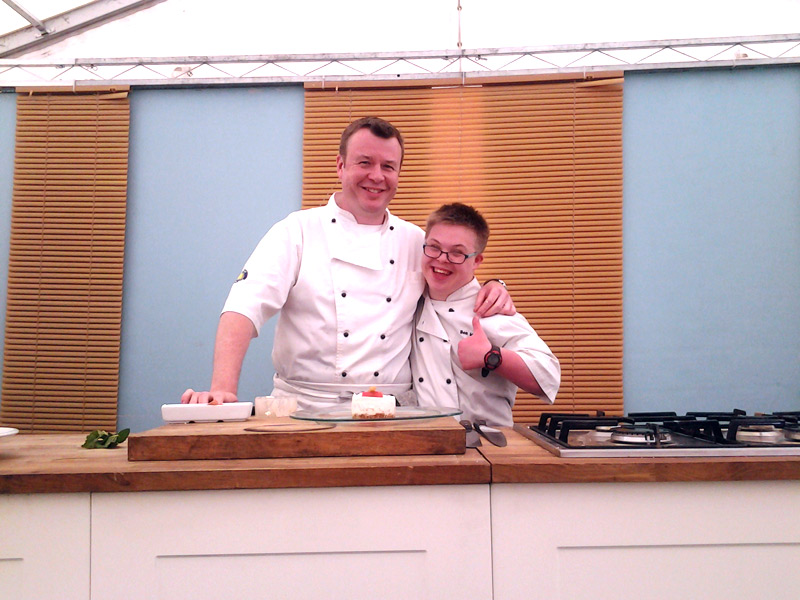 Ashley is Chef/Patron of the award winning ‘The Sun Inn’ at Colton, near Tadcaster which he has run with his wife Kelly for over 12 years and their 3 children. Their son Ben will be demo’ing with his Dad again – each year getting taller!

Within a year of being at the helm, they had their first taste of official industry recognition when nominated for the ‘Dining pub’ category in the prestigious Yorkshire Life Food & Drink Awards. Following year they won the ‘Innovation of the Year’ title in The Publican magazine known widely as the industry bible and many accolades have since followed, including ‘Yorkshire Pub of the Year,’ ‘Best Free-house’ in the Great British Pub Awards, ‘Licensee of the Year 2013’ by the British Institute of Innkeepers which is huge, and most recently, receiving a ‘Deliciously Yorkshire Taste Awards 2016’ for his Gin infused Chocolate range.

Ashley regularly holds kitchen classes and cookery demonstrations at The Sun, as well as offering Private Dining at various events and he is also a self taught Chocolatier – known for his fabulous chocolate sculptures which he makes every Christmas, using them to raise money for ‘Martin House Children’s Hospice’ near Wetherby. Last year it was an intricately designed model based on the all-time classic “Snow White & the Seven Dwarfs” featuring the Dwarves heading off to the gem mine complete with rubble trains and shimmering gem stones, with Snow White watching on.

Ingredients included 10kg of Belgian Chocolate and 1kg of Icing, and took over 40 hours to make!