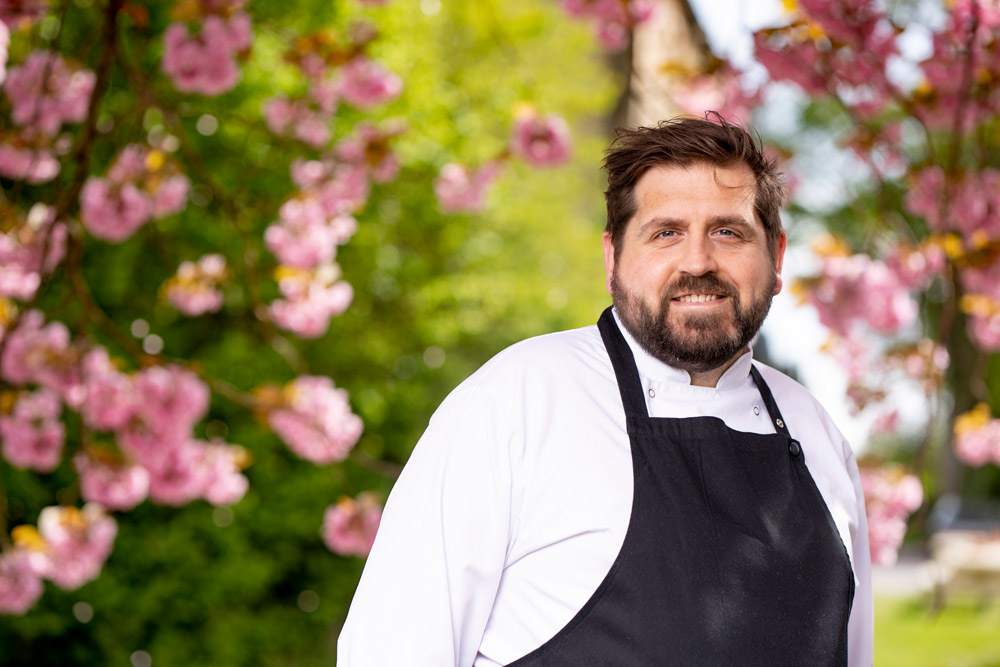 Jon is Head Chef at The Blue Lion Inn, East Witton, nestled in the heart of Wensleydale. The Inn’s real ale bar with its log fire and cosy atmosphere, large sweeping settle and sturdy oak tables provide an English pub setting for you to sit back and really relax in. Take in the Inn’s famous cuisine, which is chalked up on menu boards ready for your taste buds to be tantalised.

Whilst Jon would not class himself as a new kid on the block, he’s new to the cooking and demonstration scene, making for an exciting, fresh face to the chef circuit. He comes with a great pedigree, having begun his career at 18 in the town of Market Harborough as the youngest licensee in the country. From there he has grown his skills, through classic French training, moving on to work at the Manor House, Middlesbrough, where as head chef, he gained two rosettes. Before arriving as Head Chef at the Blue Lion, Jon worked at the Cleveland Tontine and Gisborough Hall with Provence Inns.

Jon Appleby, 34, from Middlesbrough, was hired several months ago as Head Chef by The Blue Lion Inn in East Witton, near Leyburn, is sharing his food knowledge and skills at the up and coming Great British Food Festival at Harewood House this Bank Holiday weekend.

The festival, the second in a series of 11 festivals throughout the Summer months across England, runs over this bank holiday weekend [26th to 28th May] with food demonstrations performed by well-known chefs alongside newcomers. Jon, introducing himself to the festival scene, is running a food demo on Sunday 27th May and will demonstrate a seasonal favourite; chalk stream trout, roast yorkshire fennel, sweet braised beetroot, orange and brown shrimp dressing, nasturtium and bee pollen.

The dish he will be demonstrating is just one of the new additions to the menu at The Blue Lion Inn, an 18th century Inn which is nestled in the heart of Wensleydale. The quintessential English coaching Inn has been run by Paul and Helen Klein for nearly 30 years and has been visited by high profile guests, including Jamie Oliver. They pride themselves in running a friendly, relaxed atmosphere with great food and are both very excited about Jon launching on to the food festival scene:

“Jon not only has a lot of energy and enthusiasm, but he’s got some wonderful things in store for both our regular and new customers this summer and beyond’, explained Paul, owner of The Blue Lion Inn. “We are so delighted he will be demonstrating how he cooks some of our dishes on our menu at Harewood House, he is a real talent.”

Below is a Question and Answer session with Jon to get the scoop on his culinary background, his exciting plans for The Blue Lion Inn; its menu, and much more:

Jon – how did you get interested in cooking?
Growing up I always played around in my Nan’s Kitchen and I became interested in cooking by watching her create meals from scratch. She used to make really hearty soups and stews. Homemade rice pudding was my favourite. Nothing fancy, just simple food cooked well.

When did you know you wanted to be a professional chef?
I never really thought about it until I was in a kitchen pot washing. I enjoyed cooking at home and thought why not get a job doing something I love. I thrive on the speed and challenge of it all and especially creating great food that people love.

What’s the most rewarding part of your work and why?
The interaction you get from making food …the compliments from customers give me such a buzz. Your job is to feed the guests. If they’re happy, then you have done what you set out to do…there’s no better reward than that.

What are your plans for making The Blue Lion better than ever?
You’ll find some things that are familiar, but there will also be some exciting new dishes as well, all designed with guests in mind. Oh, and I also want to offer grab-and-go lunches for passers-by who want to spend the day in Wensleydale doing outdoor activities but experience a quintessential country Inn lunch too.

What do you enjoy about working at The Blue Lion Inn?
Everything! I have great bosses in Paul and Helen Klein. They are very supportive which gives me confidence in what I am trying to achieve.

Can you tell us about two or three dishes your planning on offering this summer?
We work closely with R & J Butchers to source the very best in local meat. The new lamb dish is sourced less than 10 miles away from The Blue Lion Inn. We are in a perfect location for great produce and I believe we do it justice. We’ll have lots of specials too so always keep a look out for our latest tasty offerings.

Who do you most admire in the food world and why?
Fergus Henderson; when I got a copy of his ‘Nose to Tail’ book, it was mind blowing. It also teaches you to use all of the animal, which I firmly believe in. Michael Wignell is also someone I really look up to as a chef. I was lucky enough to be at a master class a few years ago….it was the most inspirational talk I have ever heard.

What’s your favourite kitchen equipment or gadget?
My Victorinox pastry knife – a chef’s essential knife. It’s a great all-rounder. I don’t think I know a chef without one.

If you could have one last meal, what would it be?
I’d like to say a nice big bowl of moules frites, sat in the sunshine or our amazing seasonal game dishes we cook at The Blue Lion. But to be honest my Nan’s rice pudding sitting, with my family around the table with a cup of tea would come out top!

Be sure to stop by and watch Jon’s demonstration at Harewood House this weekend or visit him with the rest of his team at The Blue Lion Inn this Summer. Visit www.thebluelion.co.uk or call 01969 624273 to find out more.