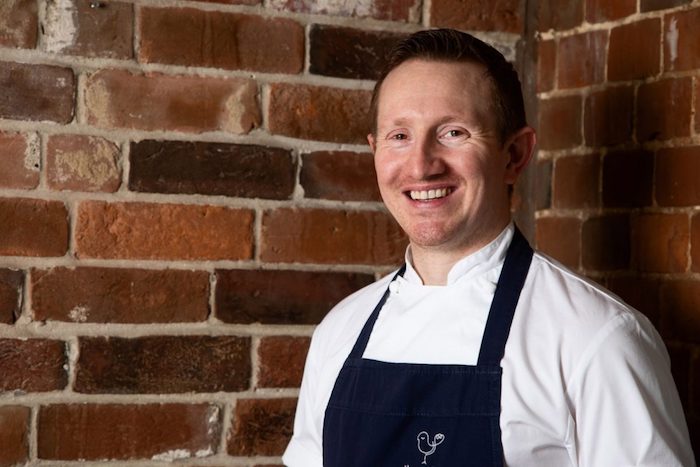 Tom Clarke, head chef at Michelin-starred L’Ortolan restaurant, grew up in Essex where he was heavily influenced by his grandmother who was a great home cook and taught him basic kitchen skills from a young age. At the age of 13 he found his first job working as a kitchen porter in a local restaurant, watching and learning from the chefs as his interest in cooking grew.

Wanting to gain a more formal education in cooking, Tom attended the Colchester Institute to attain his NVQ Level 3 in Professional Cookery in order to pursue a career as a chef. During the course, he was lucky enough to gain work experience opportunities in prestigious kitchens such as Buckingham Palace and Windsor Castle, where the royal standards left a lasting impression on Tom.

After finishing his studies in 2005, Tom started working at 1 Lombard Street in the City of London. Feeling the challenge of the commute on top of the long kitchen hours, after six months he found a role closer to home and returned to Essex to work in local fine dining restaurant Le Talbooth. Here, Tom progressed over three years, leaving with the title of Junior Sous Chef.

In 2008 Tom moved to Le Manoir aux Quat’Saisons, Raymond Blanc’s flagship two Michelin star restaurant. Tom was able to work in many different sections of the kitchen, expanding his culinary knowledge and improving his skills and techniques over the two years he was there.

In 2010, Tom moved to Reading’s Michelin starred L’Ortolan as Chef de Partie, where he stayed for a year, before deciding he’d like to develop his knowledge of French cuisine and cook in France. He spent 1 year in France, working at the two Michelin starred Le Strato hotel in Courchevel and the legendary L’Oustau de Baumanière in Provence.

Upon his return to England in 2012 he was asked by L’Ortolan’s Head Chef Alan Murchinson to return to the restaurant and Tom gladly accepted. Alan left L’Ortolan in 2015 and Tom stepped up as Head Chef, retaining their Michelin star every year since, keeping hold of 3 AA rosettes and also placing the restaurant in the top 20 of Sunday Times top 100 best restaurants in his first year in the role. Along with these accolades, Tom was also nominated for Berkshire Chef of the Year in 2015 and won the Thames Valley Chef of the Year award in 2018.

At L’Ortolan Tom has been able to exercise his creative culinary style where he imparts a modern take on classic French cuisine. Tom takes advantage of the Berkshire setting by foraging for seasonal ingredients as well as sourcing from local producers and foraging locally himself. Be it picking elderflower, elderberries, greengages, Mirabelle plums or even the local wood pigeon, Tom likes his ingredients fresh and seasonal.

L’Ortolan has now held a Michelin star for 17 years and Tom continues to push the boundaries of French fine dining introducing modern techniques and exotic flavours onto the plate.