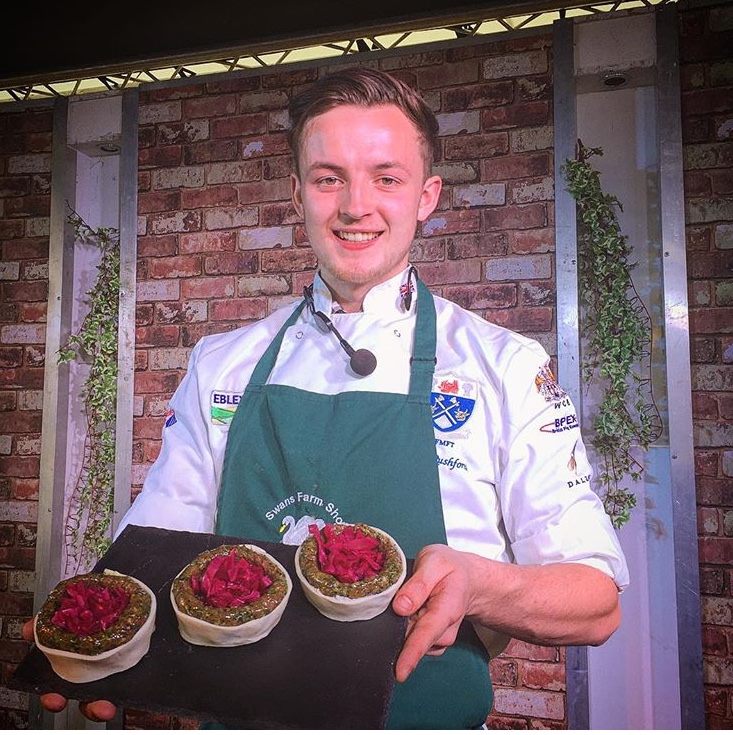 Peter is an award winning Butcher from Flintshire, working at ‘Ernest W. Edge Butchers’ Shop in Handbridge, Chester producing a mixture of traditional techniques and also more forward thinking, modern day butchery. ”Fortunately I still have the luxury of enjoying full carcass butchery which in the modern day is a craft practiced less and less due to cost and time. ”

Peter’s involvement in the meat industry came about during a work experience placement in high school. From there he was employed as a Saturday lad at the age of 15 and continued to be so for 3 years where he was at the cross roads of finishing his A levels in school and deciding on further education. During his 3 years at ‘Swans Farm Shop,’ he had developed a great interest in the trade so decided to take on an Apprenticeship in Butchery. A further 4 years into his career and with a huge amount of hard work, he has achieved a string of accolades to his name, with some of the more prestigious being: ‘World Skills UK 2016 Gold,’ ‘Meat Traders Journal Young Butcher of the Year 2016,’ ‘Hybu Cyg Cymru Livestock Scholarship 2016’ and ‘Higher Apprentice of the year’ at the Apprentice awards Cymru 2017.

”The beauty of the meat trade is there are no limits, innovation and flare are essential to survival which makes the trade a whole lot of fun as it gives me the opportunity to constantly play around and experiment with new ideas. Another brilliant aspect to the trade are events like these. It’s incredibly rewarding when given the opportunity to stand up and stage and show off something a little different which hopefully may inspire a handful of people.”

Aside from butchery, Peter is heavily involved with Young Farmers and takes part in a vast array of competitions, some of those being public speaking, craft competitions, stock judging and sometimes even singing! So as you can tell everything meat and livestock is very much a big part of his life!