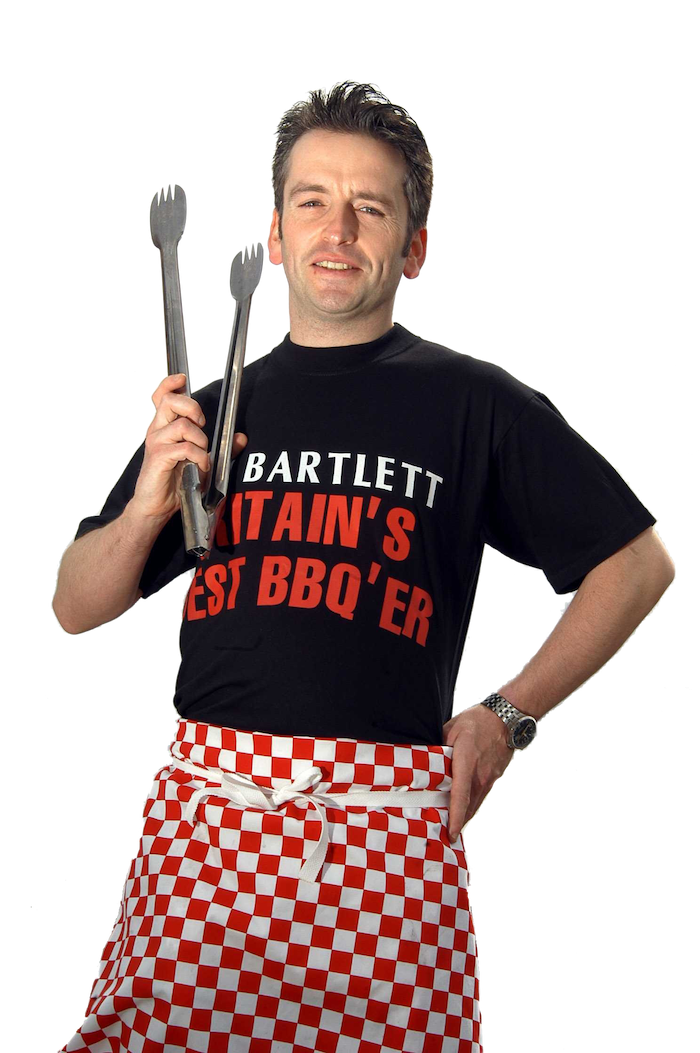 Join BBQ Ben in celebrating the Great British Barbecue, and get some fantastic tips and recipes to make your next barbecue a success @ The BBQ Stage!

Read more about Ben on his website www.bbqben.co.uk or here…

In his own words….

From a young age, I knew I wanted to be a chef. My mother is a phenomenal cook and I learnt about meat, fish and game from her. Even now she won’t let me in her kitchen! I started my catering training in Bournemouth studying 7061 and 7062 Food Skills and got my first job at Forte’s Restaurant on the seafront as a commis chef. The kitchen worked with an old-fashioned brigade system so you moved around doing everything from peeling to washing! It was great training.

I returned home and studied part time the HCIMA Certificate and Diploma whilst running our newly “converted from a cow shed” restaurant named after me, “Big Ben Restaurant”, the pun being I am short! What a fantastic learning curve running a restaurant and a licensee under 20! From chips with everything to fine dining and lobster bisque in 2 years. From the occasional customer to weddings in a marquee for 200. You bet I was a quick learner!

Always singing, I won a bursary to study Opera for two years in Florence, Italy where I also worked at Masaccio’s restaurant and learnt to cook over 100 types of pasta! Following this I was offered a job with Conran at Cantina Del Ponte in London and I jumped at the opportunity to be the Special Event Chef for Global International, London which took me to number 10 Downing Street, the Foreign Office and the European Cardiff Summit.

A few years later friends took on the Pumphouse at Hotwells and asked me to launch a new kitchen at this busy harbour-side public house. After two years, I increased sales from 200 to more than 2000 covers every week. During this time, I offered to barbecue for a friend’s wedding. I’d been used to cooking on barbecues, but when the guest list hit 100 and I had to use three grills it was a totally different situation – and I loved it! They entered me into Britain’s Best Barbecue Contest and my prize was to visit Kansas City and learn from Slaughterhouse Five, a chain of barbecue restaurants. That was in 2003 and I’ve been hooked ever since!

My top dishes that go down a treat on the barbecue include pork – pulled pork and pork ribs, chicken trio – thigh, breast and wings, king prawns and scallops, and beef brisket. You can’t beat a sirloin steak! With meat, it’s easy to overcook beef and chicken can be quite dull. Pork is great and very forgiving on the barbecue. A fish kebab works well and so do fruit or vegetable ones. Jacket potatoes work well too. Cook them, scoop out the inside and mix with cheese, peppers, onions, and chopped bacon. Re-stuff the skins and pop them back on the grill.

Then a couple of years later the brewery Marston’s Pub Company from Burton upon Trent who owned the building asked me to join them as Catering Development Manager for 1500 pubs across the country. I won several awards for training, was made a Fellow of The British Institute of Innkeeping and won the Morning Advertiser “Food Champion of the Year.”

Development Manager where I was responsible for all catering development within 2100 pubs.

After many years working for big corporations I set up my own consultancy business and wrote a book, The Haynes BBQ Manual that is available in over 75 countries. I advise several National companies and regularly write for the media, working continuously on projects for the Craft Guild of Chefs and the Seafish Industry Authority and I am the Ambassador for Crown Verity barbecues and Lions sauces. My favourite item to barbecue is fish, because you can char-grill, steam in foil, wrap in salted vine leaves or cook on wood (planking) – the options are endless! Mackerel and sardines work really well, all you need are fresh herbs, oil and flavours and the end taste is fantastic.

There are also some unsung barbecue heroes such as Sweetcorn, as well as aubergines and courgettes. Octopus is great and literally takes just two minutes to cook. All it needs is a marinade of tomato sauce, a few chillies, a bit of brown sugar and Worcestershire sauce. Don’t forget desserts. Bananas, peaches and pineapple are fabulous on the barbecue. Wrap a banana in foil and place on the grill. When it’s soft to the touch, slice it open and pour in a generous measure of Irish cream. Simple, but delicious.

The World BBQ Championships this year are in Limerick, Ireland and the best teams from 80 countries are competing. A few years ago, I was a judge at the one in Morocco and it was amazing and fascinating to witness the different styles of barbecuing from around the world. The Moroccan competitors wore their traditional dress and sat on stools hand-turning the goat they were barbecuing for three hours. The team from Argentina cooked their meat on a huge metal cross and threw charcoal on the floor below it. They too hand-turned the meat – and danced while it was cooking!

In my spare time, I give more time to my favourite charity The Eleanor Children’s Charitable Trust and have spent time in Targu Jiu, Romania distributing aid to orphanages, schools and hospitals.

Recently I have been awarded the Silver Craftsman award from the Craft Guild of Chefs and I have become a Certified World BBQ Association Judge Trainer.

“I am on a mission to bring the joy of outdoor cooking to the nation and working with children and adults to explore the wonderful possibilities of traditional British food.”