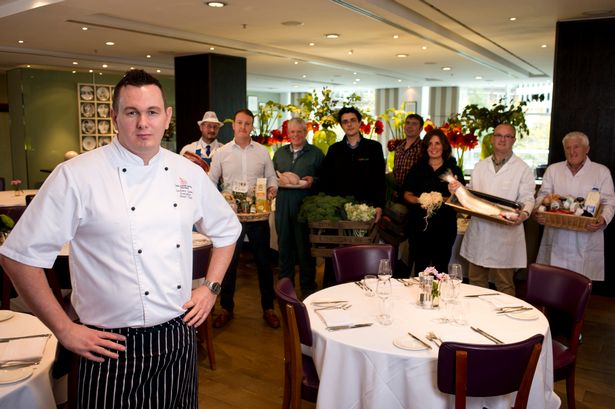 THERE’S something definitely stirring in the kitchens of The Lowry Hotel, five-star contemporary hotel on the banks of the River Irwell. A new young executive chef is on board – Andrew Green. Glossop born and bred, and now living in Stockport, at just 34 he combines vast experience running the dining operations at some of the north west’s busiest hotels with a passion for the region’s food reflected in his vivid new menu. Andrew Green’s a la carte menu will change quarterly what is now titled The River Bar & Restaurant. For autumn 2015 you can expect starters such as Pan Seared Scallops with Mettrick’s black pudding and cauliflower or Wild Mushroom Risotto; mains such as Wild Morecambe Bay Sea Bass with clam ragout, potato and spinach or Golcar Chicken Breast with tarragon, broad beans and leek velouté. There is less of the former emphasis on grills (though the Josper is still there for steaks, lobsters and specials); now the culinary experience is based on the quality of locally sourced raw materials, treated with fine dining finesse, bringing out the pure intensity of their flavours. All this served in one of the great modern hotel dining rooms or out on the curved terrace with its stunning views of Santiago Calatrava’s Trinity Bridge, symbol along with The Lowry Hotel itself of the resurgence of this historic riverside. Andrew has brought in several young commis chefs from his previous brigades. “In creating this menu I have asked for their ideas,” he says. “It’s about involving them, building a team, something I learned while working for David Gale at the Alias Rossetti (now Abode).” He has also been given a free hand to build up an unrivalled chain of suppliers, something he clearly relishes. These include Mettrick’s of Glossop, whose many plaudits have included UK’s Best Butcher in the Countryside Alliance Awards and Best Local Retailer in BBC Radio 4 Food and Farming Awards. They supply all The Lowry Hotel’s meats plus the chickens sourced by PNR Whitwam from Bank Bottom Farm at Golcar in the Pennines. These are reared and prepared on the same site, eliminating any carbon footprint. Fish comes from Neve of Fleetwood, mussels from the Menai Straits, Lancashire cheese from Sandham’s and Gornall’s in Preston,, while remarkable heirloom tomatoes are sourced through innovative suppliers Delifresh – developed near Selby, Yorkshire, they are a world away from the standard varieties – with different colours, subtler tastes and beguiling names such as Cawood Cocoa Sweet. Andrew uses them in his Buffalo Mozzarella and other zingy house salads. Italian food specialists are also in evidence – fresh pasta and ice cream comes from Amato Manchester, and IB Food supplies Bella di Cerignola olives among many other tasty foods. Andrew Green’s story “My love of food started early. From the age of 11 I worked at a greengrocers as a school job. My job was to tidy displays and clear up. What was unusual about the place was they used to have big jars of different herbs and spices, so I got intrigued by all the different smells and tastes. Plus they also stocked six or seven different kinds of apples, which alerted me to the variety of produce that was out there if you looked. “A friend was working in a Glossop Italian restaurant called Firenze and getting £15 a night. I wanted a bit of that. Soon I was doing three nights after school, so earning £45 a week, pot washing, cleaning. Soon I graduated to veg prep, bruschetta chopping. I learned so much from Renato, Giuseppe and Giovanni. How to make home-made pasta, how to gut sardines with your fingers, how to concassé tomatoes. After a year I was elevated to pasta and pizza chef. “From money I saved, at 16 I paid for my own holiday to the Algarve in Portugal near the Spanish border and the food I discovered there was a revelation. By 19, after doing my A levels, I was head chef at Firenze. The chefs took me out to the Naples region for two weeks. Wow! I had already discovered Chinatown, so my horizons were expanding.” His professional horizons included the Radisson SAS at Manchester Airport, where he started as a chef de partie, eventually returning to become exec chef, a post he also held at its Airport rival, the Crowne Plaza before joining The Lowry Hotel. His CV also includes a globetrotting exec chef/training role with Park Inns as well as that stint at the Alias Rossetti under his obvious mentor David Gale, later of the Hilton. Soaking up lessons such as “learning not to over-elaborate with dishes. Let the best ingredients speak of themselves”. That ethos shines through in his first Lowry menu. Andrew’s other culinary hero is Marco Pierre White, the celebrity chef who over-saw the original launch of The Lowry Hotel’s Restaurant. The omens are good for the future of this iconic place to wine and dine in the city.

The Lowry Hotel The five – star Lowry Hotel is an independent luxury hotel in Manchester and the only hotel in the region to be part of the prestigious Leading Hotels of The World. Since opening in April 2001 the hotel has won over 60 awards.